RUSSIA : A giant with fragile feet

Among the many countries that are striving today to achieve self-sufficiency in the sector of industrial tomato products, few can boast of such rapid growth as Russia. After the collapse of its production and processing infrastructure in the 80s and 90s, Russia was able to revitalize its agricultural potential and develop processing tools, which have not yet reached previous levels of activity but have enabled the country to reclaim more than 40% of its domestic market in less than ten years.

This ramp-up, which was presented at the TomatoNews Conference in Avignon in May 2019 (see article in the appendix), took place against a backdrop of a significant rise in Russian domestic demand. Almost exclusively focused on concentrated tomato purees, and more particularly on industrial pack products with dry matter contents between 12 and 30%, or above 30%, foreign supplies to the Russian market gradually decreased from 160,000 mT of finished products between 2005 and 2009 to less than 150,000 mT at the beginning of the 2010s and around 120,000 in recent years. At the same time, the quantities processed increased rapidly to around 500,000 mT and could have risen to more than 600,000 mT in 2020 if climatic conditions and the Covid crisis had not disrupted industrial and processing investment programs. 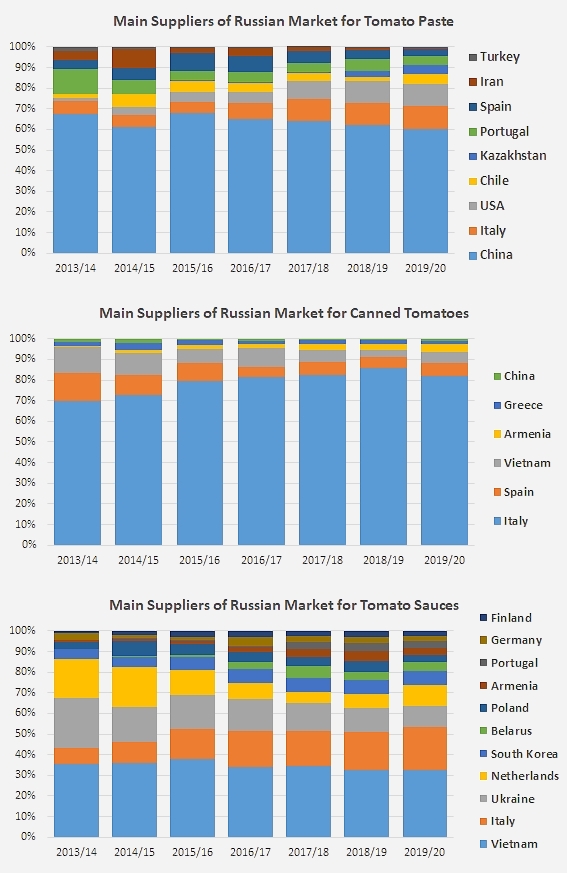 In effect, the last marketing year and the current one appear more like periods of consolidation. Russian paste purchases from abroad recorded a temporary increase, probably linked to the under-performance of the past season, while the increases observed in foreign purchases of canned tomatoes and sauces are in line with the normal results of previous years, thereby confirming the country’s continued dependence on external supplies for these two product categories.

Supplies of concentrated purees are shipped in from a small dozen countries that accounted for nearly 97% of the quantities over the last three years. In a context marked by a slowdown in imports, the preeminence of China on the Russian market has been more and more contested over the past four or five years, in particular by Italian, US, Chilean and even Kazakh products. Spanish products are struggling to keep up with these new competitors, while Portuguese, Iranian and Turkish performances have gradually flagged (see additional information at the end of the article).

Russian purchases of canned tomatoes, relatively stable for five or six years around an average of close to 17,000 mT of finished products, are sourced from Italian processors, which account for more than 80% of the volume. Spanish and Vietnamese products (6% and 5% of canned tomato imports over the last three years) are struggling to maintain their positions ahead of competitors from Armenia, Greece, China, etc.

In contrast to the concentrated puree and canned tomato categories, where the leading country controls up to 60 or 80% of Russian supplies within a fairly small group of countries, the market for sauces is extremely open. The leading country – Vietnam – has not provided more than 30% of Russia’s supplies in recent years and the number of industries active in this sector is significant: on an annual market of around 17,000 mT of finished products, Italy and Ukraine respectively accounted for 17% and 11% of Russian purchases of sauces over the last three years, ahead of the Netherlands, Korea, Belarus, Poland, Armenia (between 7% and 3% each of the total), but also Portugal, Germany, Spain, etc. (see additional information at the end of the article).

Russian expenditure for its supplies of tomato products has fluctuated sharply in recent years, between 6 and 10 billion rubles depending on the year and on the variations in the exchange rate of the ruble against the US dollar. The size of this invoice has no doubt been a motivating factor in the development of the industry nationwide.
Indeed, expressed in US dollars, Russian expenditure has decreased markedly in recent years, from nearly USD 200 million in 2013/2014 to just over 120 million in 2018/2019. Last year, the increase in expenditure to around USD 137 million is mainly due to additional purchases of pastes, intended to replace those that could not be produced due to the postponement of industrial installations. This surge in imports highlights the vulnerability of the Russian market in the event of a poor performance during the processing season.

China (for obvious reasons of proximity) and Italy share most of the income generated by Russian purchases of tomato products (41% and 22% respectively of the USD 130 million paid annually by Russia for all of its supplies over the last three years). The United States and, to a lesser extent, Chile, Kazakhstan, Spain, etc. are also benefiting from this market which should, in the future, achieve more and more independence with regard to foreign operators. 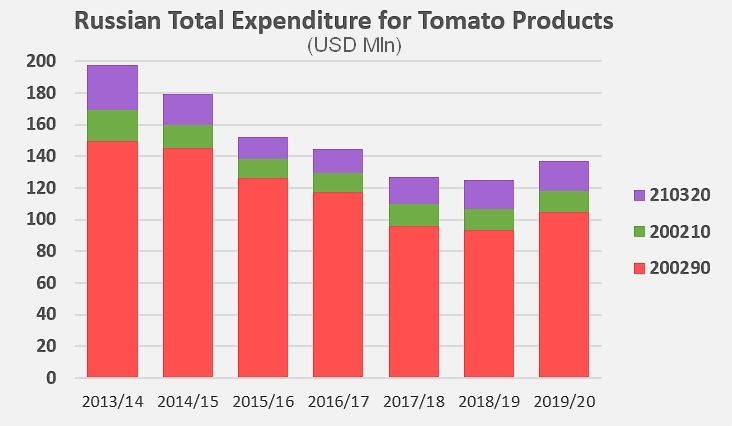 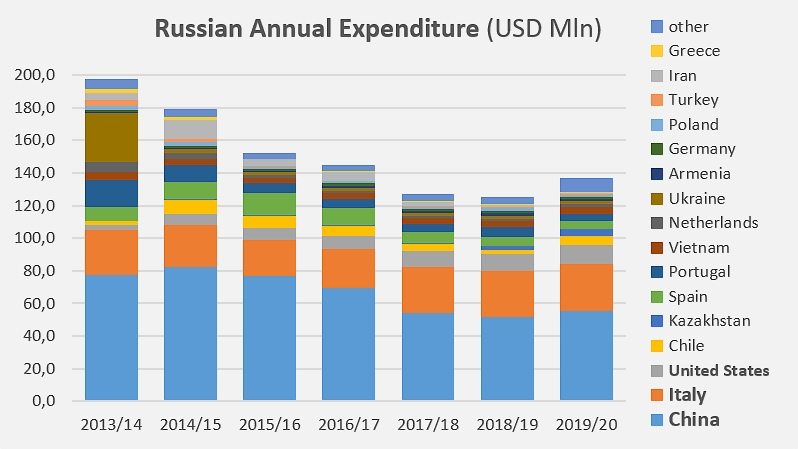